WhatsApp To Spotify: The Biggest Technology Outages From 2022 – The Indian Express

We are all dependent on the internet for our daily source of entertainment and even livelihood. But over the past few years, some services and platforms have come to define this internet usage quite significantly. WhatsApp, Instagram, and TikTok have billions of users and when these services go down, there is chaos and mayhem. As 2022 comes to an end, Ookla and Downdetector have compiled a list of the top ten technology outages that impacted us. Let’s take a look at the full list starting with the biggest ones first.

According to Downdetector, Spotify faced the largest reported outage of the year on March 8. The music streaming service was down for nearly two hours. Downdetector– which is where most users turn to report an outage— had more than 2.9 million reports from users as the service went down and they were unable to listen to music. 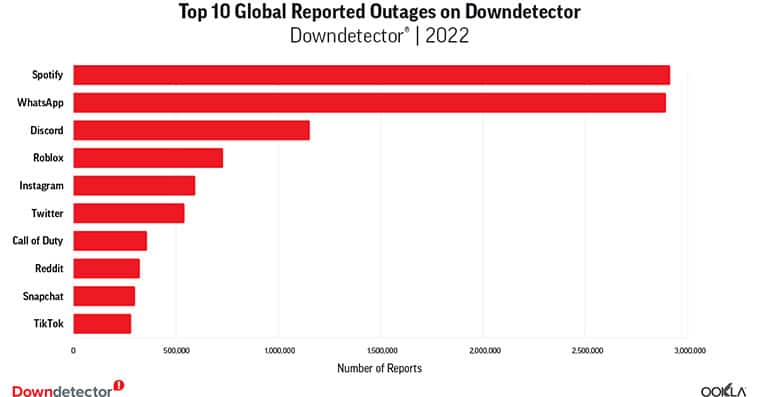 Spotify and WhatsApp saw the most user complaints when the services were down. (Image via Downdetector and Ookla)

WhatsApp is one of the world’s most loved messaging apps and we cannot do without it all, especially here in India. On October 25, WhatsApp was down for a few hours as users were unable to send messages or call their friends and family members. In India, WhatsApp has close to 400 million plus users and when the app was down, there was chaos. Downdetector saw around 2.9 million users reporting an issue, though this was around 20,000 less than the total number for Spotify. “The brief outage was a result of a technical error on our part and has now been resolved,” a Meta Company spokesperson said later on.

On March 8, the instant messaging and VoIP platform Discord went down for about two hours. During the downtime, over 1.1 million people reported that the service was inaccessible on Downdetector.

Roblox players had trouble playing the game on May 4 this year. Around 12 AM UTC, more than 700,000 players reported that they were unable to load the game. While the game servers were up and running again in a few hours, some players had to wait some more time before they were able to jump into the world of Roblox.

Instagram went down for nearly three hours on July 14. More than 600,000 users reported on Downdetector that they were unable to load feed or message their friends and family.

Even the now Elon Musk social media platform Twitter saw a huge service disruption on July 14 as well. More than 500,000 users reported that they were unable to scroll through tweets, check their feeds and comment on other tweets. Thankfully, the service came back online in about an hour.

critically acclaimed franchise Call of Duty experienced server issues this year. On August 16, European players were unable to play the game with more than 350,000 people reporting the issue on Downdetector.

One of the world’s largest content aggregation and discussion websites Reddit went down for nearly two hours on April 3 this year, with more than 300,000 users flocking to Downdetector that the website was indeed inaccessible.

On July 12, more than 300,000 users reported on Downdetector that they were unable to send messages or share pictures with their friends.

On the morning of September 15, US TikTok users struggled with watching content on the video-sharing platform. Soon after, more than 300,000 users reported on Downdetector that the service was indeed inaccessible, but luckily, TikTok came back in a few hours.