US Congress Has ‘fired The Starting Gun’ On The Green Industrial Revolution – Citywireselector.com

The US is now better placed than ever for a green energy revolution which will become embedded in its industrial economy.

This year has seen the passing into law of two acts by US Congress and President Joe Biden which Chamberlayne said are key to America forging ahead with clean energy.

‘In the last few months, you’ve had two very significant pieces of legislation from the US government – the CHIPS Act and the Inflation Reduction Act. These are really going to fire the starting gun on a green industrial revolution in the US market,’ he told Citywire Selector.

The CHIPS Act aims to boost the US semiconductor industry, which Chamberlayne said would support the onshoring of clean energy technology in the US.

‘We view semiconductors as a key enabling industry. Every single sector needs semiconductors to make their products or their infrastructure or their services smarter, more connected, more efficient.’

Meanwhile, the Inflation Reduction Act would complement this by providing long-term clarity to the renewable energy industry in terms of ‘forward planning, tax credits and economics’.

‘The lack of regulatory clarity has held back the acceleration in renewable energy development in the US market. If you look at things like electric vehicles, batteries and everything, one of the big issues is that a lot of supply chain rests in Asia,’ he said.

‘The Inflation Reduction Act contains a provision that electric vehicle sales will only be eligible for a tax credit, if they contain materials – and this is all the way down to the battery materials like lithium, iron and phosphate – that have either been sourced within America or within America’s trade partners.

‘We see this catalysing a huge amount of homegrown investment into the whole electric vehicle and battery supply chain in the US.’ 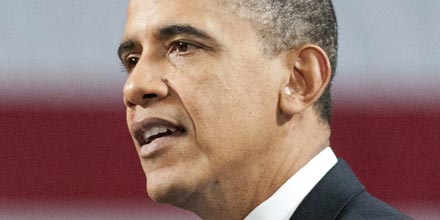 A challenge the US has faced in clean energy development has been political changing of the guard, most notably the transition from climate-friendly President Barack Obama (above) to sceptic Donald Trump, who reversed a great deal of his predecessor’s policies.

Chamberlayne said these two new acts, signed into law by Congress and the president, would not be as easy to unravel.

‘One of the issues that we had under the Obama administration was a lot of the sustainability initiatives were done by presidential decree, so it was relatively straightforward for Trump to come in and unpick those,’ he said.

‘What’s important about the Inflation Reduction Act is that this is being put into law. If it was to be reversed, it would have to go through the US Congress and Senate to do so.’

He said the reshoring of industry would also prove politically popular and gain bipartisan support.

‘I like the fact that Biden says when he when he hears the word climate, he hears jobs. This is going to be enormously beneficial to US job creation, and re-industrialising parts of the US economy is definitely going to be a vote winner.’

‘This is something that will be, in time, adopted by Republicans too as being good for the economy and their constituents.’