Next week, Warner Bros. Discovery Sports promises to harness Web3 technology to preview what it calls a “metaverse experience” around the London leg of the UCI Track Champions League.

“We have now shifted to a place where the media experience is forefront,” said Michelle Munson, co-founder & CEO of blockchain application developer Eluvio. “The adoption of Web3 by the sports mainstream has only just begun and more and more people are going to participate.”

IBC365 talks to Warner Bros. Discovery Sports (WBDS) and to Eluvio about the emergence of these concepts and technologies in live sports broadcast.

WBDS connect audiences in the metaverse

During the London final of the UCI Track Champions League on 2-3 December, WBDS plans to ‘deliver a full immersive broadcast experience in the metaverse.’

We asked them what this meant.

“The biggest difference is what [we] can create in that digital environment,” explained François Ribeiro, Head of Discovery Sports Events. “Fans will have a direct interaction with riders in private podcasts and sessions. Fans will have the possibility to question riders as if they were accredited media. That type of interaction is the biggest difference to a standard web stream.”

Also available through this new channel will be video profiles of riders, archive footage and complete documentary series about the sport on-demand. There will be more live feeds available too including all onboard feeds, a referee-cam, a camera on the floor manager and a couple feeds following athletes. Another live view will be from a camera in the OB van giving an over the shoulder shot of the live director.

“These are views you’d never see in the World Feed but I guarantee fans will find it an interesting experience to share. We are trying to think how rich and large we can go in terms of access to the content.”

All of this will be “complementary to the linear TV product” and intended to attract a different target audience group. Discovery think interest will be dominated by fans who are more likely to want to engage interactively “as opposed to lean back big screen viewing,” said Scott Young, SVP Content and Production, WBD Sports.

“The metaverse is a bit of a confusing reference at the moment but as soon as people start to see what we’ve developed for the UCI CL you will see it allows a very different touch point for the sport,” Young explained. “It’s saying, you can create own avatar and that we will deliver you all the content and give you the ability to navigate and access it as you wish.”

By contrast, he said, conventional streaming is “very two dimensional. Fans stay longer with [interactivity] and tend to return more often to it than to a dot com platform with 15 small screens on it.”

The initiative is also about positioning WBDS “as a live event producer which is bold on innovation and taking risk,” said Ribeiro. 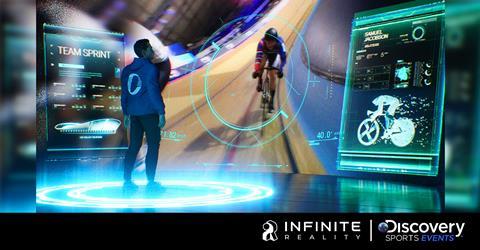 This event was chosen because of the control that WBDS has over it. “Since we are the rights holder, the promoter, broadcaster, and distributor we control the full chain so we can define the specs of the user experience in the metaverse without asking permission of a third party,” Ribeiro expounded.

It will act as a test run for activating similar metaversian engagements on other sports properties it holds.

Young commented: “We are learning how we can engage the audience and how we position it differently to other types of content. The metaverse is an extension of us being a fan-first broadcaster and is for fans who tell us they want to be immersed in the product.”

Throughout the track cycling series WBDS will also capture realtime performance data (power, heartbeat, cadence) from all the riders and display it as TV graphics and around the LED perimeter of the velodrome enabling spectators and viewers to watch live data.

“Nobody has done this in terms of in-stadium experience before,” claimed Ribeiro. “Not just in cycling – I’ve never seen in any sports broadcast.”

Web3 in sport moves beyond NFTs

What fan wouldn’t want to buy an unforgettable sports moment? Even the most shoulder shrugging of sports lovers has heard of Nonfungible tokens (NFTs) which likely their own club or favourite athlete is offering for sale.

FIFA is among the latest offering digital collectibles of the World Cup via FIFA+ Collect. Sorare has deals with the top five major soccer leagues including the Bundesliga to market video-based tokens. Separately, analysts Deloitte predict that all sports are likely to have some form of NFT activation.

But relatively simple digital image tokens are just the starting point when it comes to the potential of Web3 tech in sports. WWE Moonsault is a potential model for NFT video implementation, an NFT marketplace enabling sports rights holders to monetise their video archives around a live event.

Content for this is created by Blockchain Creative Labs (the NFT business and creative studio formed by FOX Entertainment and Bento Box Entertainment) and it runs on Eluvio Content Blockchain.

NFT holders can also unlock VIP access to other perks, such as being able to partake in exclusive live Q&As with WWE Superstars, access to which is managed via the NFT or blockchain token. This is similar to the activation that WBDS is planning around the UCI CL.

From a technology standpoint, Eluvio claims Moonsault is the first broadcast TV NFT that transforms into a new digital asset for fans tied to major televised events. This transformation occurs within the Eluvio Wallet as an on-chain operation that updates the media using the video archive from WWE.

A new revenue stream is handy but Web3 is more than NFT merch. “It taps into the core of people’s identity,” Munson said. “Blockchain enables personalised ownership. The diehard fans of WWE absolutely love to participate in community drops of highlights of their favourite stars.”

Web3 media activations for WWE are currently based on its archive but distributing the live event itself on the blockchain is “not out of the realm of possibility,” Munson confirmed.

In fact, Eluvio is partnering with an (unnamed) sport in Australia in a live streamed pilot. This would potentially cut traditional third-party licensees like broadcasters and streaming service providers out of the content and from the value chain. Munson is keen to emphasise the wider value of this:

“We can harness this technology to make a new way for publishers, creators and for fans to be around media and to disintermediate [traditional] value extraction.”

Looking further ahead, Web3 might also fundamentally upend the corporate structures of professional sports ownership. Clubs could be reconstituted as DAOs (distributed autonomous organisations) in which fans vote to take meaningful decisions that many have long craved. Potentially that includes investing in players and even picking the team.

“Yes, that’s a possibility in the future,” said Munson. “Is that where the current focus is? No. We’re are just getting to the point where major brands and people trust this technology enough to invest in it but we’re not yet rethinking the ownership structures with on-chain DAOs.”

Munson also emphasises the security of streams on the blockchain, piracy being rampant in current sports distribution models.

“We’ve worked hard to get robust security models with standard DRM through these Web3 experiences. Everyone knows this is essential. If you have a set of licencing terms coupled to tokens on the chain then you know exactly who has what. Web3 enables secure monetisation.”

Read more The metaverse: Unpicking the potential for broadcasting