The Results: Have Trials ‘nudging’ Shoppers To Healthy Eating Options Worked? – The Grocer

The results have been mixed, with an Asda trial notably backfiring as shoppers prioritised price. So how successful have other efforts been?

When Sainsbury’s showed that by reducing the price of fruit & veg it was able to boost sales by nearly 80%, it was billed as an example of how so-called industry nudge tactics could help transform the nation’s diet.

Part of a “hugely exciting” trial of interventions overseen by IGD and the University of Leeds, it led to high hopes of heathier diets for millions if rolled out at scale.

A year on, however, and the cost of living crisis is seemingly threatening long-term interventions by the industry.

So, does nudging work, and what can be done to ensure it survives even in this grim economic climate?

The Sainsbury’s trial slashed the price of a range of fruit & veg to 60p over two four-week periods, leading to a 78% sales uplift in January 2020 and a 56% rise during the lockdown of January the following year.

The spike was hailed as “far above” the usual boost from families making new year healthy eating changes.

Last week The Grocer revealed IGD’s second tranche of findings, which once again rammed home the importance of price. This time it focused on a trial by Asda to range meat-free products alongside regular meat items, after a survey last year showed 60% of people thought this would help them choose a more environmentally sound and healthier diet. In fact, the result saw meat-free sales crash by 30%, with the trial merely serving to underline how much more expensive they were than the meat options.

In contrast, further research from the trial showed Sainsbury’s was able to substantially shift diets in favour of fruit & veg by topping up the government’s Healthy Start vouchers, aimed at helping the poorest families provide food for their children.

Such was the success of last year’s move – echoed by several other retailers – that Sainsbury’s recently announced it was bringing the scheme back for a further six months, saying it would help millions of families on the breadline.

The Food Foundation spearheaded a campaign to advertise veg to kids

Sainsbury’s Healthy Start initiative was “the only trial in this report targeted towards supporting a single demographic group; specifically low-income families,” says the report.

It was also “the only trial that delivered long-term behaviour change after the trial had stopped”, it adds.

However, the report concludes the perceived cost of healthier food remains “the biggest barrier” to change. But despite acknowledging this is truer than ever in the current economic climate, it goes on to say that “incentivising healthier and more sustainable options may not be economically viable for industry in the long term”.

Despite this, IGD head of health and sustainable diets Cathy Capelin claims it is because of the mixed success of the trials that they are so useful.

“Everyone wants trials to work but it’s actually equally important to learn from ones that fail, such as Asda’s move with meat-free,” she says. “These trials are about proving what really does work in the real world. We are providing evidence for industry to follow.”

IGD is to announce trials with other major supermarkets in the new year and Capelin insists there is a collective will in the industry to make nudging work, even though she admits progress has been far too slow.

IGD’s is not the only nudge project to find fickle consumer behaviour difficult to gauge and support from industry hard to maintain.

In December 2019, The Grocer revealed high-sugar cereals were being placed on the top shelf and healthier products promoted at the expense of calorie-laden alternatives, with mixed results (see box, left), in a separate trial overseen by the Consumer Goods Forum and the University of Oxford.

Mixed results: the trials and outcomes

Outcome: Tesco’s promotion of fruit & veg in its Fresh 3 scheme sees sales rise 13% and is later rolled out nationally. But Sainsbury’s banishing HFSS cereals to the top shelf makes little difference to sales.

It was part of the so-called Collaboration for Healthier Lives project, which saw retailers including Tesco, Sainsbury’s, M&S and Boots experiment with new promotions and layouts at more than 100 stores, to see if nudging could make Brits healthier.

However, a report on the pilots, which also involved the Guy’s and St Thomas’ Charity, found despite some success in making baskets healthier, the project was “hamstrung” by a lack of commitment from retailers and suppliers, as well as the impact of the pandemic.

In September this year, programme co-chairs Tesco and Danone said there had been “great variation in efforts across the sector” and claimed more progressive companies were being held back by an absence of regulation and the lack of a level playing field.

Perhaps the biggest success story to date of industry nudging shoppers to healthier diets has been the Food Foundation’s Peas Please initiative. Last year, a progress report revealed an additional 636 million portions of vegetables had been sold over the first four years of the scheme, which involved commitments from retailers such as Tesco, Sainsbury’s, Aldi and Lidl to encourage and increase fruit & veg sales. 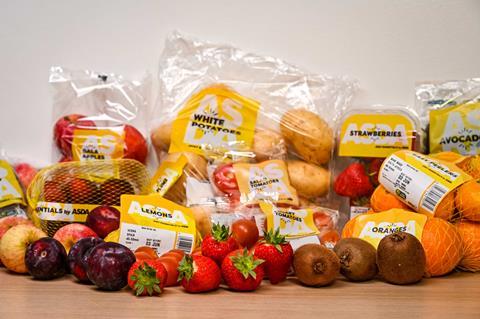 Yet here too there are worrying signs the financial crisis is affecting progress. With the latest update due next month, figures released in October by Veg Power, the umbrella body for the campaign, showed veg consumption had fallen by 7.5% in the past year as consumers tightened their belts.

Of course, if initiatives like Veg Power are the carrot, the industry is now on the receiving end of the stick with the introduction of new restrictions on HFSS promotions, though further moves to ban multibuys and junk food ads have been postponed.

Yet the situation in supermarkets shows there is so far little in the way of joined-up thinking or a levelling of the playing field.

Just this week, The Grocer revealed Morrisons was putting multibuy promotions of confectionery tubs front and centre in its new loyalty card strategy.

Meanwhile, Tesco has been accused of breaking its pledge to eschew HFSS multibuys in a frozen food promotion.

And with Christmas around the corner, nudging people towards healthier choices looks unlikely to remain top of the agenda, despite the potentially huge benefits to public health if retailers can get it right.