People With COVID-19 Who Also Had PTSD Are Less Likely To Survive: Study – Bel Marra Health 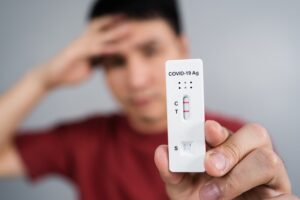 People with PTSD may be more at risk of death from COVID-19, according to a new study. The study found that a person’s mental state can affect their likelihood of surviving the virus. The study focused on PTSD but also found a link between other mental health conditions, such as depression and anxiety. The findings suggest that mental health should be considered when treating COVID-19 patients.

Post-traumatic stress disorder (PTSD) is a condition that can develop after a person experiences a traumatic event. PTSD can cause a range of symptoms, including flashbacks, nightmares, anxiety, and trouble sleeping. PTSD can also lead to feeling detached from other people, feeling irritable or jumpy, and avoiding things that remind you of the trauma. For some people, PTSD can be debilitating and make it difficult to carry on with day-to-day life.

PTSD is a complex disorder that is consistently being studied. In this new study, researchers from UC San Francisco and the San Francisco VA Health Care System found that veterans with PTSD had an 8% increased risk of death if they had COVID. Compared to people with the virus and without a psychiatric diagnosis, there was a 9% increased risk of hospitalization.

For people with major depression, the risk of death and hospitalization was 13% and 21%, and for people with bipolar disorder, 29% and 46%.

To help eliminate any effect of confounding variables, researchers compared veterans with each mental health disorder to veterans without a psychiatric disorder. Adjustments were made for co-occurring medical conditions, including diabetes, HIV, cancer, cardiovascular disease, kidney, lung, and liver disease. Smoking and obesity were also adjusted for.

In conclusion of the study, although people with PTSD were at more risk of death and hospitalization than those without a psychiatric disorder, they surprisingly fared better than patients with all other forms of mental illness.

“PTSD is routinely screened in the VA Health Care System, so it may be more reliably detected even for less severe cases, compared with other psychiatric conditions,” said first author Kristen Nishimi, Ph.D. “Older veterans, who may have been diagnosed with PTSD many years ago and have chronic PTSD, may have symptoms that are relatively less severe or better managed.”

Researchers did note that patients with PTSD under the age of 65 had worse outcomes than older patients (16% higher risk of hospitalization compared with 6% for the 65-plus cohort).

While some degree of cognitive decline is nearly inevitable as you age, there are other factors that can take a toll on brain function, such as mental health. This can affect memory, concentration, and overall brain function.

The Smart Pill can help to enhance cognitive function and memory through 9 ingredients that help to support, nourish, and maximize brain health. These include ginkgo biloba, huperzine A, bacopa extract, rosemary extract, and a B vitamin complex. The formulation of these ingredients is an excellent way to help fight free radicals, boost circulation, and provide nutritional support to assist with brain health.