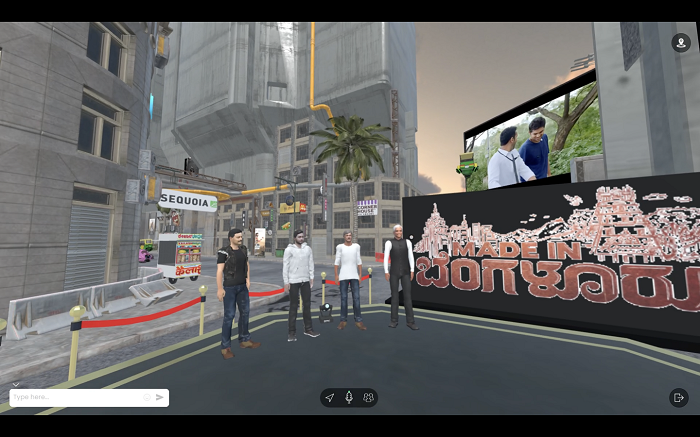 Bengaluru December 2022: interality, an engine for Mixed Reality Worlds, has announced the release of ‘Made in Bengaluru’, a Kannada drama film, inside interality’s Metaverse Bengaluru where movie fans are meeting and taking selfies with the film cast avatars, exploring famous spots in Bengaluru, playing games and quests to win exciting real-life rewards.

made in Bengaluru is a Kannada drama film written and directed by Pradeep Sastry starring Madhusudan Govind in the lead role with Anant Nag, Saikumar, and Prakash Belawadi in pivotal roles. The story follows the journey of three dreamy-eyed middle class boys who venture into setting up their startup.

Inside the Metaverse Bengaluru platform, powered by interality, fans are visiting and experiencing the movie Made in Bengaluru where you can go to the Movie Quiz Room and play to win tickets to the exclusive Film Premiere happening on 29th December in Bengaluru. You can meet the Film cast on the Metaverse stage and take selfies with the selfie drone camera. You need to complete a quest to win a chance to take real-life selfies with the film cast in person in Bengaluru. You can also go for some treasure hunting to win passes to the prelaunch event of the movie. Overall 50 people can win rewards in the Metaverse Bengaluru.

“We’re thrilled to power the launch of Made in Bengaluru film in Metaverse Bengaluru. Metaverse has massive opportunities for the Cinema and Entertainment industry as the future of content distribution. The fans can enter and explore the film-themed Virtual Worlds, understand the theme and story of the film through immersive mediums, engage and interact with the movie through play games and win film collectibles, memorabilia and claim real-life rewards such as meet-&-greet with the film stars. This helps build greater fandom for the film”, says Farheen Ahmad, CEO, interality.

B S Balkrishna, Producer of Made In Bengaluru, shares, “Always was amused whenever I heard about metaverse, the way its future in community building is unpredictable. For sure Bangalore Metaverse of interality was one benchmark-setting metaverse we experienced in India, we are happy and excited to have our movie promotion in Bangalore Meatverse of interality. I would thank FanStreet for making this happen.”

“First of all, I would like to thank interality and FanStreet for having Made In Bengaluru promotions in Bangalore Metaverse. Bangalore is home for thousands of startups and this metaverse for sure is throwing more impact over it, we are pleased to get placed and be a part.”, adds Pradeep Sastry, Director of Made In Bengaluru.

“Being a techie, was always taken away with the scope of 3D virtual worlds. I am pleased to have my debut film promotions in Bangalore Metaverse.”, says Madhusudan Govind, Lead of Made In Bengaluru.

In the past, interality has successfully launched ‘Memeverse’, a virtual world for MemeChat, and ‘Tubbiverse’, an Apocalypse-themed, Token Gated platform, created & launched by a Solana NFT Community Tubbies. The startup has also launched GM BLR Cafe in Metaverse Bangalore. It is a Virtual Reality world launched by the popular Web3 community, GM BLR.