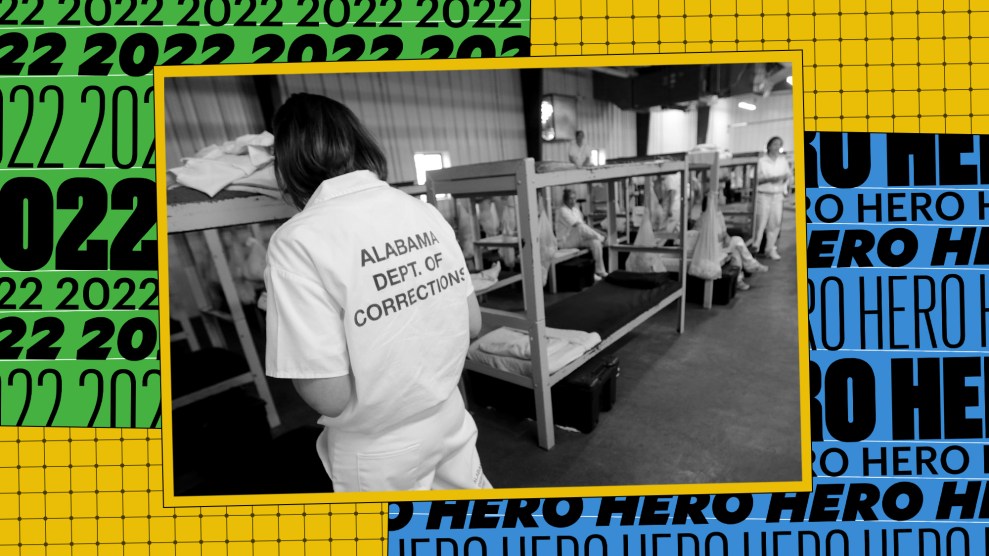 In September, thousands of inmates in Alabama’s state prisons went on a labor strike, compelled by truly appalling living conditions. The state’s prisons are the deadliest in the country, and a US Department of Justice investigation revealed that Alabama “routinely violates the constitutional rights” of inmates, failing to protect them from homicide and sexual assault, among other abuses. This year, Alabama’s parole rates have been staggeringly low, at just 10 percent—meaning the state’s overcrowded and unsanitary prisons are operating at more than 160 percent capacity.

“Those incarcerated only see one way out of prison: in a body bag,” Pastor Kenneth Glasgow, founder of The Ordinary People Society, a group that worked with the strikers, told the Vera Institute of Justice.

What’s really unreasonable, though, is that the state responded to the strikes by canceling weekend visits and reducing the number of daily meals from three to two, apparently due to strain on staff resources from the work stoppages. Without the unpaid prisoner labor force—slave labor by another name—preparing three meals daily for nearly 23,500 people was virtually impossible. Inmates referred to the reduction in meal service as “bird feeding,” an alleged attempt to starve strikers into submission.

“It makes no sense for us to continue to contribute to our own oppression,” one striker told the nonprofit media collective Unicorn Riot. “We finance our own incarceration through our free labor and spending every dime we get in they canteens and so forth. It is our money and our family’s money that is used to keep us incarcerated and oppressed like this.”

The continued atrocities Alabama’s inmates endure are part of a well-known pattern of state brutality. In 2019, the Southern Poverty Law Center obtained thousands of photographs from the state’s deeply troubled St. Clair Correctional Facility depicting gruesome scenes of brutalized and murdered prisoners. In one photo, a message was painted on the wall in an inmate’s blood: “I ask everyone for help,” it read. “Mental Health won’t help.”

The man who wrote it had schizophrenia and bipolar disorder and had tried to kill himself more than once. He’d also been confined in solitary for six years, according to court testimony, where he was forced to wear shackles around his ankles during his daily hour of exercise.

Things haven’t gotten any better since then—in fact, they’re getting worse, according to the DOJ, which sued the state in December 2020 for violating inmates’ civil rights. Prisoner-on-prisoner homicides have increased, excessive use of force by prison staff is prevalent, and sexual abuse has “continued unabated” in Alabama’s correctional facilities, federal attorneys say. The case is expected to go to trial in 2024.

In the meantime, incarcerated people have few channels available to them for redressing complaints about prison maltreatment, thanks to a long history of national legislation and DOJ policies designed to stifle inmate complaints. For instance, the Prison Litigation Reform Act, which former President Bill Clinton signed in 1994, limits prisoners’ ability to file civil rights claims to the federal judiciary. The longstanding practice of consent decrees gives the Department of Justice oversight over prisons, jails, and police departments in cases of civil rights violations, but these have been inconsistently enforced (the practice was all but been discontinued under Trump’s DOJ, only to be reinstated by Biden’s). With so few other options, incarcerated Americans have bravely turned to political organizing and labor strikes.

The Alabama strike is just the latest high-profile prison labor action to receive attention in recent years. In 2018, for instance, incarcerated people throughout the US engaged in a nationwide prison strike in response to the deadliest prison riot in recent history at the Lee Correctional Institution in Bishopville, South Carolina. The most recent spate of work stoppages has highlighted state officials’ stunning indifference when it comes to handling rampant civil rights violations in their prisons.

The labor organizing reveals inmates haven’t given up—but they are fed up with the culture of impunity within the Alabama Department of Corrections. Prisoners paused the labor strike after three weeks, in mid-October, both to give the state Department of Corrections time to respond to their demands and because the low calorie intake from reduced meal service in prisons was affecting the health of incarcerated strikers. However, the strikers have said that if their demands are not met, the work stoppages will start again in the future.

As usual, the staff of Mother Jones is rounding up the heroes and monsters of the past year. Find all of 2o22’s here.