The mythic Wild West has been a fascination of pop literature, with the story of cowboys, vast desert landscapes, and gunfights, being twisted into new and more daring forms over the decades.

There’s been much peril and violence, especially with the gunslingers. Flying Wild Hog and Focus Entertainment decided to take a new approach and bring in a new menace to the West, the bloodthirsty atrocities, vampires. Evil West is a vampire-hackin’ third-person action-adventure game.

It reimagines the 18th-century American pioneers as an undercover monster-hunting organization fighting off bloodthirsty abominations.

The game takes place in a fictional Wild West era in America, where vampires are rampaging the city and wreaking havoc. In Evil West, you play Jesse Rentier, a vampire hunter from a long line of vampire hunters. The Rentier Institute is to the Sanguisuge monsters what the Men in Black are to Aliens. The institute is a conspiratorial organization headed by William Rentier, the protagonist’s father. The father has been on undercover missions, slaying monsters, since the 18th century. However, things go out of control after a Grand Elder goes on a rampage and frees the vampires from the shadows.

Like his father before him, the protagonist, Jesse Rentier, works for the Rentier Institute. As the last bastion of hope in a changing world, Rentier represents ‘the old guard’ – a classic cowboy hero of the past.

The plot follows Jesse’s valiant attempt to defeat the supernatural threat that seeks to establish dominance. Dressed as an average cowboy in a patterned leather trench coat, a wide-brim hat, and leather boots, his mean appearance is quite intimidating.

With an electrified gauntlet by his side, shotguns for monster mashing, and a strong right hook, Rentier sets forth on a quest to redeem his family’s institute and battle an array of strange beasts as the night unfolds, and the action of Evil West gets weirder.

The game seems pretty silly and predictable at best. However, developers make up for it with intense and gruesome blood-gushing action.

The Evil West introduces four species of creatures that are believed to be mythical, with only the Rentier Institute knowing of their existence. From burrowing into the ground to flying the skies, each species harbors massive strength and the strongest of them all is the Highborns.

Their massive wings give them the ability to launch aerial strikes while also summoning bats to create more damage. These bats can also regenerate this species’ health, making the Highborns a taxing foe to battle. 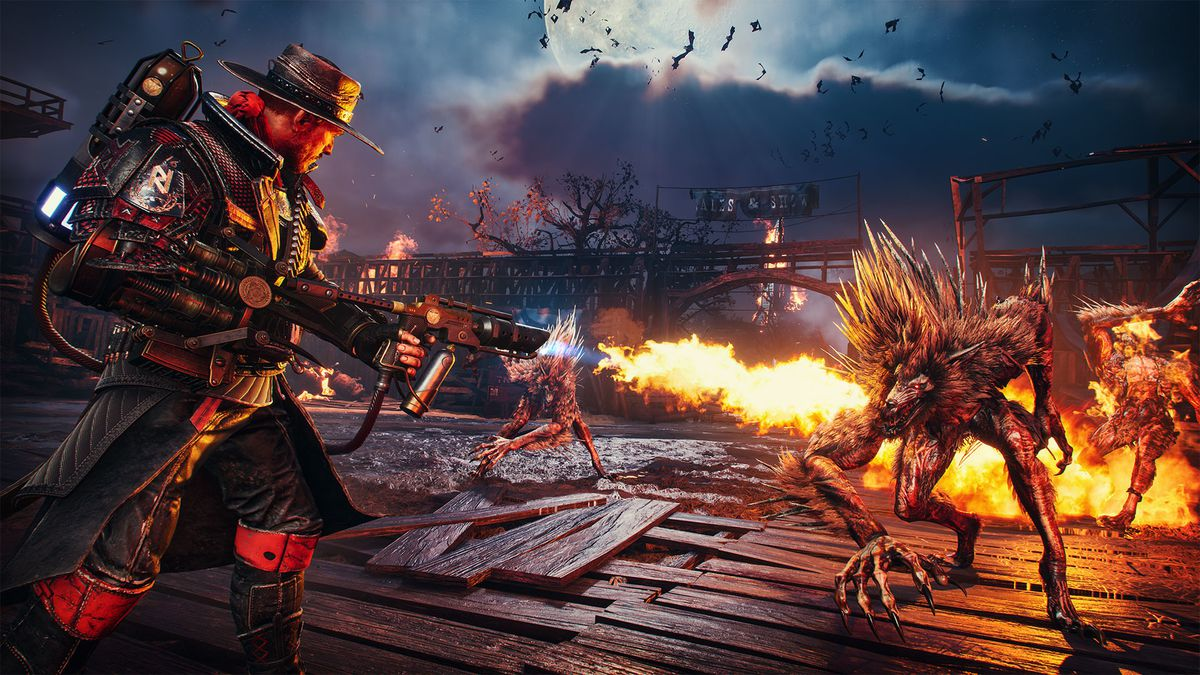 Next in line are the Leechers. They possess a preternatural shield of spikes that allows them to step forward in line during combat. Their shields are inherently used in deterring frontal attacks, and they do a good job at that. However, damaging the shield makes them vulnerable. Because they can regenerate their shield, quick action is your best bet for taking them down.

The third mythical creature is the Naglas. They seem to be a cross between werewolves and vampires. These are heavily built creatures that are fast on their paws and are pretty excellent at launching ambush attacks. The Naglas move in small packs but grow stronger with a harmonious howl.

Finally, the Boo-Hags are a rare species of vampires that can’t grow their skin. They appear to have a low IQ, but they have little to no fear when it comes to spying on humans. However, don’t let their zombie-like traits fool you; they are fierce and notorious enemies.

The Evil West has it all: explosive action, bloodshed, and combat that evolves. You play Jesse as he hunts down vampires through the American Frontier. As the potential saviour of the vampire-laden country, Jesse works with some cool sets of gadgets from the institute that match up to the creatures’ susceptibilities. You can’t expect anything less when your dad used to be the head of a monster-slaying institute.

The electric gauntlet is the most fascinating weapon of choice because it can do so much. In a tweet, Flying Wild Hog made a reference to the gauntlet, saying, “Name a more iconic vampire-killing duo.”

That being said, the gauntlet is not the only intriguing technology Jesse has in his arsenal, but it does conjure up more fun and electrifying performances, literally. You can stun the creatures with a gauntlet before giving them one in the face that obliterates them in a gory encore. Moreover, you can use the gauntlet with other weapons to unleash a satisfying combo.

The gameplay allows for a menagerie of actions as vampires and their companions get more deadly. Some develop claws, while others grow larger and develop rock shields. You will have to time your shots right, and you can blast evil bugs out of the sky.

You can dodge and roll to avoid the most powerful attacks from bloody cleavers and spikes. These controlled movements are extremely responsive and make for a dynamic combat system that evolves alongside Rentier. Evil West is unique in the genre with its standout combat functions.

As the game progresses, you’ll be able to gain access to more unconventional weapons while upgrading those in your possession. For instance, you can increase the number of rounds your pistol fires or fuse your rifle with electric power for more damage. Moreover, it doesn’t take long to gain access to new abilities that enhance the slaying experience with a fresh feat.

Out Of This World Weapons 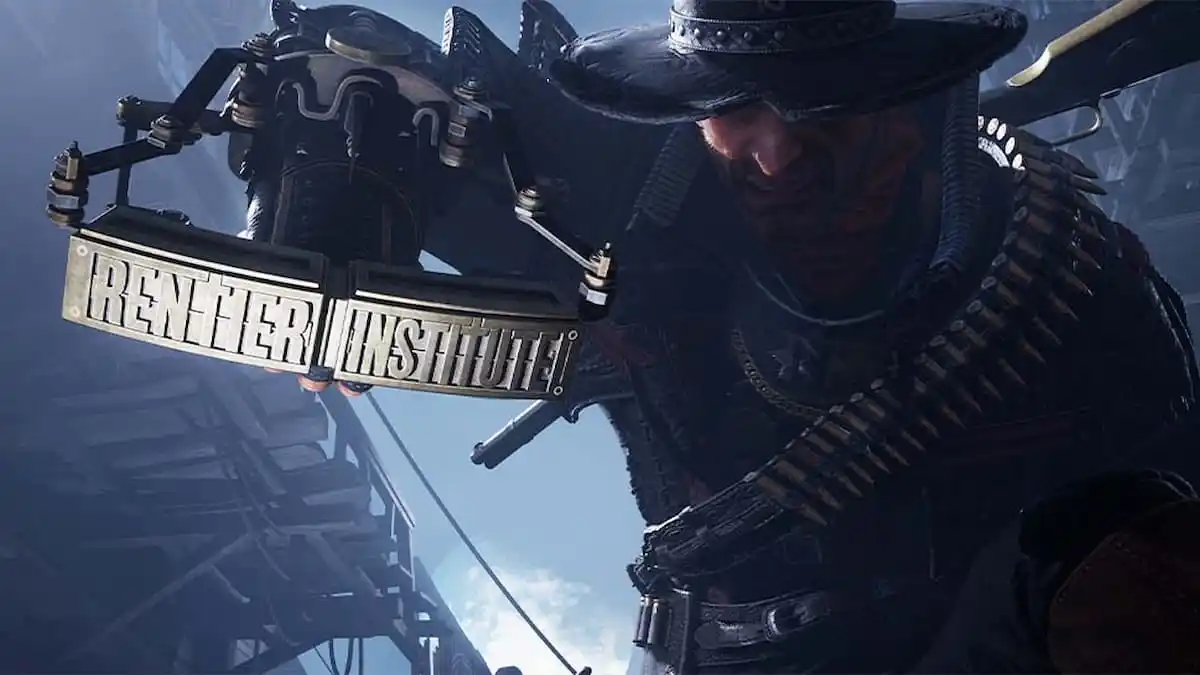 The Rentier Gauntlet, the most fascinating weapon in Evil West

When unconventional battles come to the fore, you have to resort to an unconventional arsenal. As a Rentier Institute protege, Jesse gets access to the finest steampunk gadgets. Each weapon has a unique range of abilities that players can combine with the gauntlet for an unbeatable, gratifying kill.

The revolver is a great companion for launching fast attacks at close and medium range. The rifle is ideal for accurate shots and hitting the creature’s vulnerable spots. Additionally, the Rentier Boomstick, a sawed-off shotgun, imposes massive damage from close range. The Rentier Gauntlet, however, reigns as the supreme tool to use in battle. With plenty of tools to choose from, it’s up to you to make the right combination for powerful attacks.

The Evil West is a mix of good and bad. The intense combat action and impressive steampunk gadgets add a layer of fun to slaying vampires. On the downside, the game’s story feels bland and incomplete, unlike other gunslinger games like Red Dead Redemption.

We know every villain story needs a backstory and a dialogue spotlight that sheds light on their despicable acts. However, much of the story is told from Jesse’s perspective, which is simply not enough. We can only hope that Evil West will lead to a full-scale revival of one of literature’s most popular and enduring fiction genres.