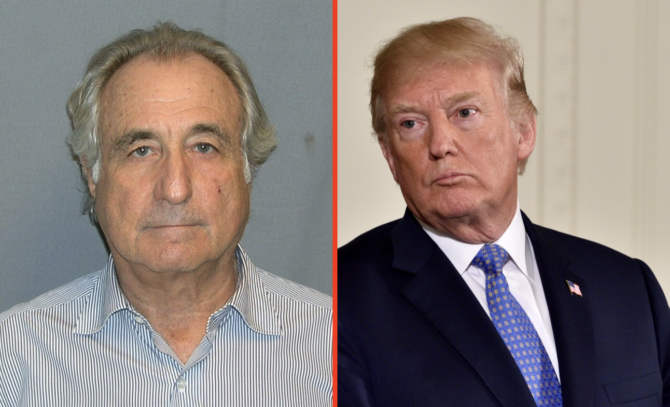 It accuses the Trumps of “grossly” inflating the ex-president’s net worth by billions of dollars and giving false and misleading financial statements to lenders for at least a decade.

The lawsuit seeks a $250 million judgment and to ban the Trumps from ever leading companies in their home state of New York ever again.

Speaking to NewsNation yesterday, 79-year-old Sorkin said he would be open to representing Trump, if the one-term, twice-impeached ex-president asked him to.

“Everyone’s entitled to a defense,” he said. “The problem he’s run into, of course, is that he apparently doesn’t listen to his lawyers. So you’re dealing with a very difficult client and trying to guide him in the defense of this case.”

Hmmm. Considering Bernie Madoff ended up being sentenced to 150 years in prison, the maximum sentence allowed, and dying behind bars of kidney disease, we’re not sure Trump would want Sorkin to represent him.

Then again, beggars can’t be choosers.

Sorkin went on to say that the most concerning part to him about James’ lawsuit is that she will be referring it to federal authorities in Manhattan, who may choose to open a criminal investigation into bank fraud.

“There’s an argument to be made the New Yorkers don’t particularly like Mr. Trump,” he said, “but don’t forget, New York has been the center of trying worldwide major drug dealers, terrorists, mafioso. And that has not prevented a jury from being selected.”

In other Trump lawyer news, the ex-president’s former attorney Michael Cohen told Chris Hayes at MSNBC yesterday that he thinks James’ lawsuit will lead to the downfall of the Trump Organization.

“It’s going to put an end to the entire company,” Cohen said, adding that when James said during a press conference yesterday that it was his testimony before Congress about the Trump Organization that kicked off her investigation, he was “elated.”

“When she mentioned my name, I was obviously quite elated, to be honest, because I’m finally getting the recognition for what I’ve been sitting on the mountain tops yelling for three and a half, four years, which is that the Trump Organization is a criminal enterprise and that I got thrown under the bus by dear old Donald,” Cohen said.

Trump responded to James’ lawsuit on Truth Social yesterday by calling her a “fraud” who has caused “record numbers of people and companies to flee New York.”

“She is a fraud who campaigned on a ‘get Trump’ platform, despite the fact that the city is one of the crime and murder disasters of the world under her watch,” he wrote.

While you’re here, check out the trailer for the HBO’s 2017 movie “The Wizard of Lies” starring Robert De Niro and Michelle Pfeiffer as Bernie and Ruth Madoff.

Related: Melania is pissed at people criticizing her new Christmas NFT grift, lashes out at ex-BFF in tweet