While some of us use our phones to communicate and keep in touch with others, many use their smartphones to play games. And thanks to the COVID-19 pandemic, mobile gaming has witnessed tremendous growth in the last three years. Even though there are a number of impressive paid titles on Android, free games on the Play Store often come close with select titles like Genshin Impact offering similar graphics and gameplay compared to their desktop counterparts. We list some of the best free games on Android from this year.

Apex Legends Mobile is one of the most popular multiplayer battle royale titles available on the Google Play Store and it only launched in May 2022. The game quickly clocked more than 25 million players within a week after its launch. The mobile version of this popular game gained massive popularity because the graphics and gameplay are close to what the PC version offers. Also, the mobile version comes with some unique characters and events. It remains one of the best mobile games to come out in 2022 and even Google declared it as the Game of the Year for the Play Store in 2022. According to Google, Apex Legends Mobile was regularly trending on the Play Store and appeared in the top 10 download lists throughout the year.

Genshin Impact is an open-world adventure game based on gacha mechanics. And it remains a much-loved option and was even awarded the ‘Best Ongoing’ game in Google’s year-end list. Featuring an elemental combat system, you can play the game solo or enjoy it with friends. Based in a fictional land named ‘Tevyat’, Genshin Impact has a decent storyline and a wide range of characters to choose from, with every character bringing something unique to the table. With graphics similar to ‘The Legend of Zelda: Breath of the Wild’, Genshin Impact features cross-save support so you can easily resume your mobile session on your PC or other devices. If you are a casual gamer who enjoys playing with friends, Genshin Impact might be the game for you.

If you dislike multiplayer shooting games, give Call of Duty: Mobile a try. Featuring several game modes like Death Match, Battle Royale, and ranked playlists, the game is well optimized and runs pretty well even on older hardware. Moreover, there are endless customisation options to choose from. The touch controls are responsive and monetisation is mostly cosmetic. If you want action-packed gunfights and fast-paced rounds, Call of Duty: Mobile is the way to go. It remains a fan favourite on mobile. Call of Duty Mobile is one of the most popular shooting games on Android. (Image Credit: Google Play Store)

Longing for a deckbuilding game like Hearthstone? Make sure you give Gwent a try. For the uninitiated, Gwent is a spin-off of the popular mini-game in The Witcher 3: Wild Hunt. Many familiar characters also make their way in the game from the Witcher books and games. The gameplay is pretty simple yet complicated. Each player in Gwent starts with 10 cards from the deck in hand. Every card in Gwent has a point value, and the player with the most points at the end of the round wins. However, your opponent will also be building their own deck while attacking yours, which means every round you play will be different from the previous one. Set in the fictional world of Gielinor, Runescape is a massively multiplayer online role-playing game (MMORPG) where you can explore the open world and go on solo or co-op missions. Depending on playstyle, players can choose to engage in melee combat, fight from a distance or cast magical spells. Runescape also features a wide variety of enemies and bosses like dragons, demons, rock monsters, serpents and more. The game also has 28 skills to master and features dozens of locations, each offering something different. With 28 skills to master, you can explore various locations like the medieval city of Burthorpe, the harbours of Catherby and the Kharidian desert to name a few. The game is also cross-platform compatible, meaning you can enjoy the game with your friends on PC as well. 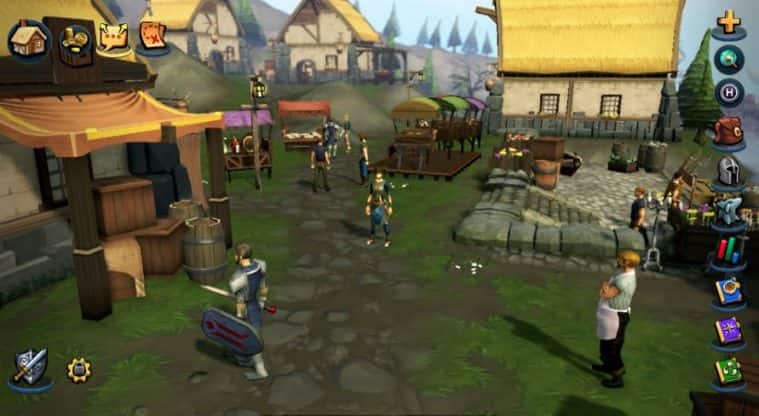 Runescape is one of the most popular massively multiplayer online role-playing games of all time. (Image Credit: Google Play Store)

If you are looking for a massively multiplayer online role-playing title, Diablo Immortal is one of the best mobile games available on the Google Play Store. Set between the events of Diablo II and Diablo III, Diablo Immortal lets users customise their characters the way they want by letting them select between various classes. Players can also explore the vast open world, go on raids and fight against demons with others. It also supports cross-save functionality, so you can easily resume anywhere from your mobile or PC.