Once Republicans reclaim House control in January, the U.S. will again be under a divided government, and according to the latest PBS NewsHour/NPR/Marist poll, a majority of Americans have no confidence that lawmakers will be willing to work together to solve the nation’s complex problems. That’s despite the fact that most of the American public support them working toward compromise instead of partisan gridlock.

Here are some of the new poll’s top takeaways.

More people give Congress credit for getting work done, but aren’t optimistic about the future

After the Democratic-led Congress forged legislative breakthroughs on infrastructure, climate change, gun safety and same-sex marriage, about a quarter of Americans — 24 percent — said this body has done more than other recent sessions. That’s up from 15 percent in 2018 and the biggest thumbs-up Americans have given Congress’ productivity since October 1998.

Despite the significant jump, that opinion is still the minority: 40 percent of Americans say Congress has done less than others in recent years, and a third of U.S. adults say members of this Congress have been about as productive as their predecessors. 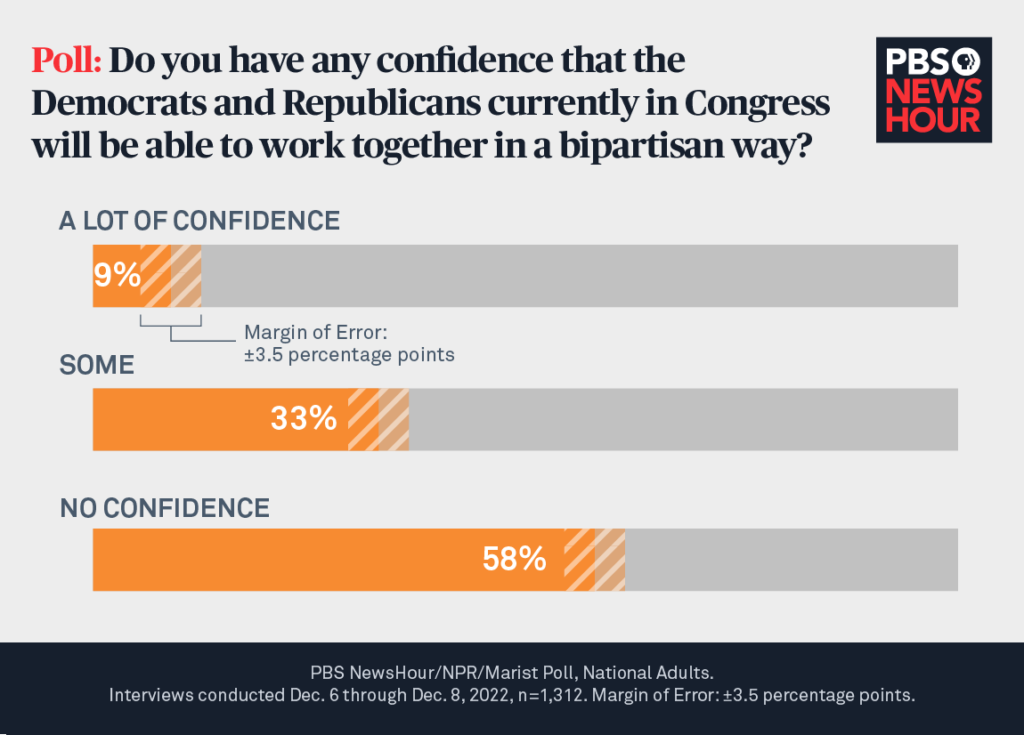 Pessimism “seems to be the default trend in U.S. politics,” said Stuart Rothenberg, a senior editor for Inside Elections.

“People don’t trust politicians at all,” he said. “The public is sick and tired of promises, and they’ve watched politicians do their political dances and be hypocritical. They don’t expect very much.”

Those years of political impasse may have shaken people’s faith in the next Congress’ ability to find solutions to many of the nation’s chronic problems. A majority of Americans — 58 percent — have no confidence that Democrats and Republicans on the Hill can work together over the next two years. That’s especially true among roughly 64 percent of Republicans and independents, as well as 45 percent of Democrats. Political pessimism among Americans has more than doubled since 2008, when the nation was in the throes of the Great Recession. Back then, a Bloomberg News/Los Angeles Times poll suggested that closer to a quarter of Americans felt that Congress was incapable of working together.

Meanwhile, 33 percent of Americans have more confidence that Congress can get something done over the next two years, and roughly one out of 10 Americans expect them to accomplish a lot. People in urban areas, parents of children under age 18, Democrats, as well as millennials and members of Gen Z are more likely to have high expectations.

Roughly three-quarters of Americans say it’s more important for Congress members to compromise with each other to achieve solutions, up from recent years when about two-thirds of Americans felt that way. Meanwhile, 24 percent of Americans overall said it’s more important for government officials to stand on principle even if it means gridlock – a viewpoint held by a somewhat higher percentage of Republicans (34 percent) than independents (21 percent) or Democrats (17 percent).

“The country is yearning, aching for compromise and less partisanship,” Rothenberg said.

A subtle boost in Biden approval, plus familiar frontrunners for 2024

Public opinion around Biden’s job performance may have shifted slightly in the last few weeks.

Overall, 43 percent of Americans say they approve of his work so far. That’s a statistically insignificant nudge of one percentage point from last month, but look more closely and there are other signs of a thaw. The number of Americans who say they are unsure of how they feel about Biden’s performance is now at 9 percent, up from 5 percent shortly after the midterm elections. Meanwhile, disapproval of Biden’s performance has diminished, with 48 percent of U.S. adults still disappointed in how he’s doing — a drop of 6-percentage points since mid-November. After months of dismal approval ratings, even small gains are big for the Biden administration. 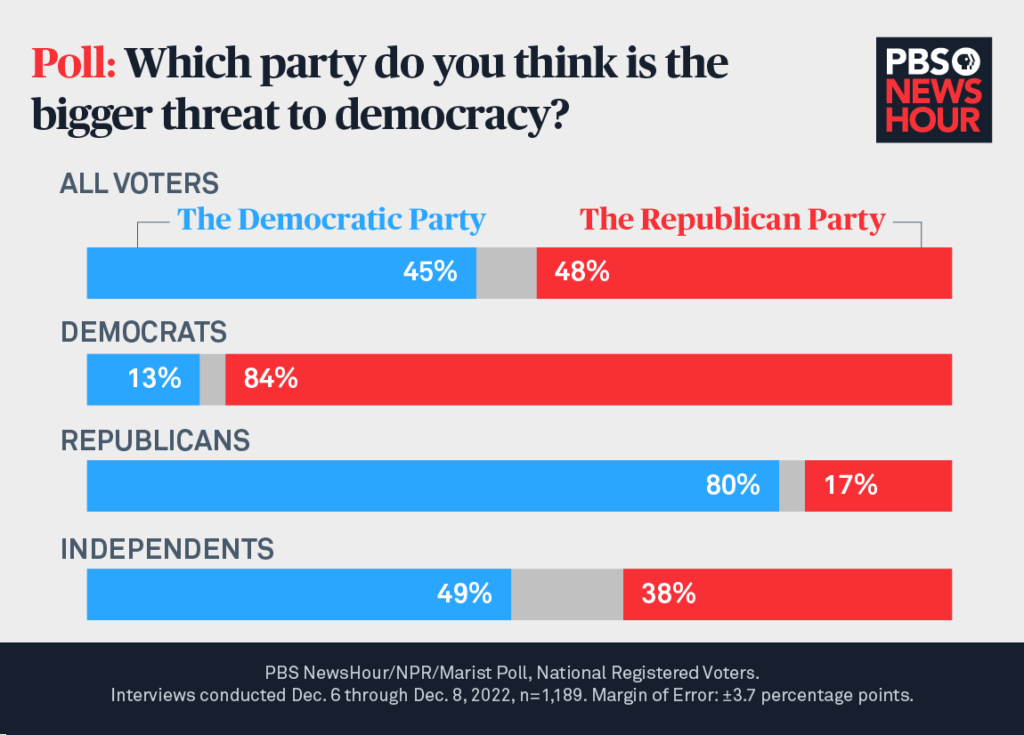 When it comes to Biden’s political future, about a third of Democrats and Democratic-leaning independents say they want him to be the Democratic Party’s 2024 presidential nominee. Two years is arguably a political eternity, but the latest poll found that Democrats were about twice as likely to prefer that Biden represent their party in a presidential run compared to Vice President Kamala Harris or Transportation Secretary Pete Buttigieg. Another quarter of Democrats said they would rather nominate someone else entirely.

When asked a similar question, 45 percent of Republicans and Republican-leaning independents said they still favor former President Donald Trump as their leading 2024 candidate. Meanwhile, 33 percent preferred Florida Gov. Ron DeSantis and 8 percent wanted to see former Vice President Mike Pence make a White House run. About one in 10 of Republicans would rather see someone else nominated.

Some polls have suggested Trump’s popularity may be sliding amid recent controversies, and a number of prominent Trump-backed Republican candidates failed last month to win their campaigns, raising questions about the vitality of the reelection bid he launched in mid-November. But Republican strategist Olivia Troye said it is too soon to write off Trump, adding, “We’ve been there before.”

This latest poll is not the only signal that Trump hasn’t lost his hold on the Grand Ole Party, Troye said. In Congress, House Minority Leader Rep. Kevin McCarthy, R-Calif., is “struggling” while MAGA Republicans and the Freedom Caucus thrive, she said.

“When you see those dynamics play out, … I don’t think that speaks to the fact that Trump is the past,” she said. “Trumpism is the Republican Party right now.”

Americans’ top priority for the new Congress, and finding common ground amid partisanship

Out of a list of issues that might be priorities for the next Congress, inflation surfaced as the single most important issue for 31 percent of U.S. adults, and was especially important to Republicans, independents, white men who aren’t college graduates and Trump supporters. That maintains a monthslong trend of voters picking inflation as the leading issue ahead of the midterm elections. 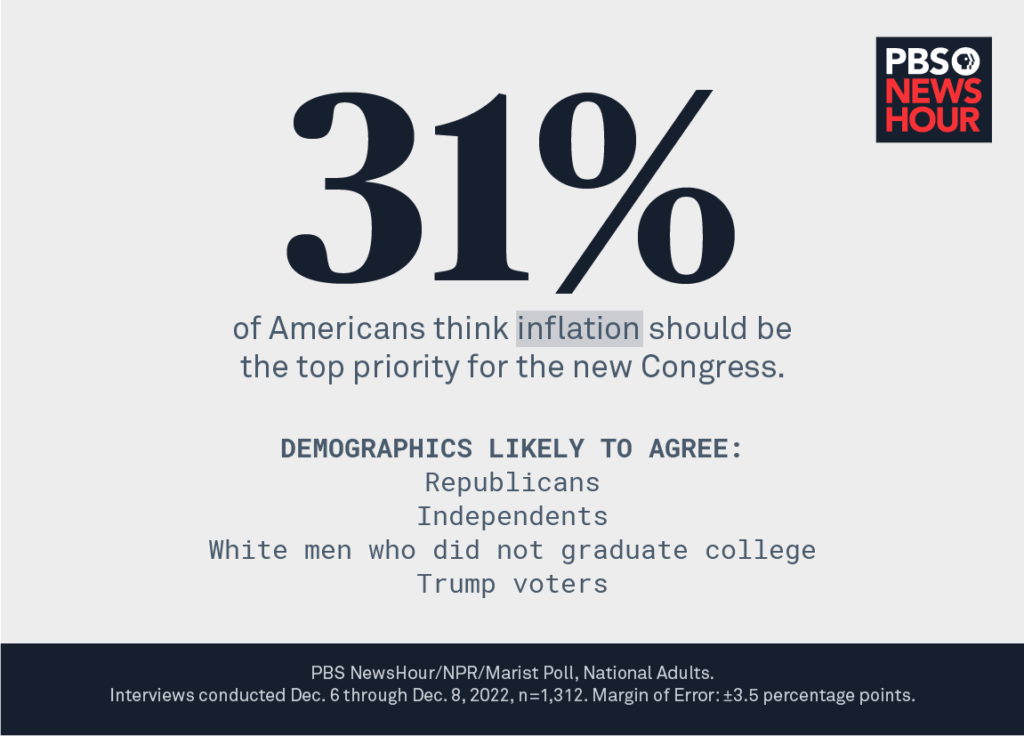 In the new poll, preserving democracy was the second-most important priority among all Americans, as well as the top issue for Democrats, white people who graduated from college, Baby Boomers, members of the Silent Generation and Biden voters.

Its No. 2 rank on the list of priorities may belie a more widespread concern: Thinking about the issues that divide the country, eight out of 10 Americans say there is a serious threat to the future of the nation’s democracy. That concern is reflected across political parties, generational divides, race, geography, income and education and is on par with how Americans felt after Trump supporters led an attack on the U.S. Capitol on Jan. 6, 2021.

When asked which party poses a bigger threat to U.S. democracy, Americans were split, with 48 percent saying it is the Republican Party and 45 percent saying the Democratic Party. Though more Americans picked the GOP overall, independents were significantly more likely to say the Democratic Party poses a bigger threat. Interestingly, 13 percent of Democrats pointed fingers at their own party, along with 17 percent of Republicans who thought the GOP is worse for democracy. 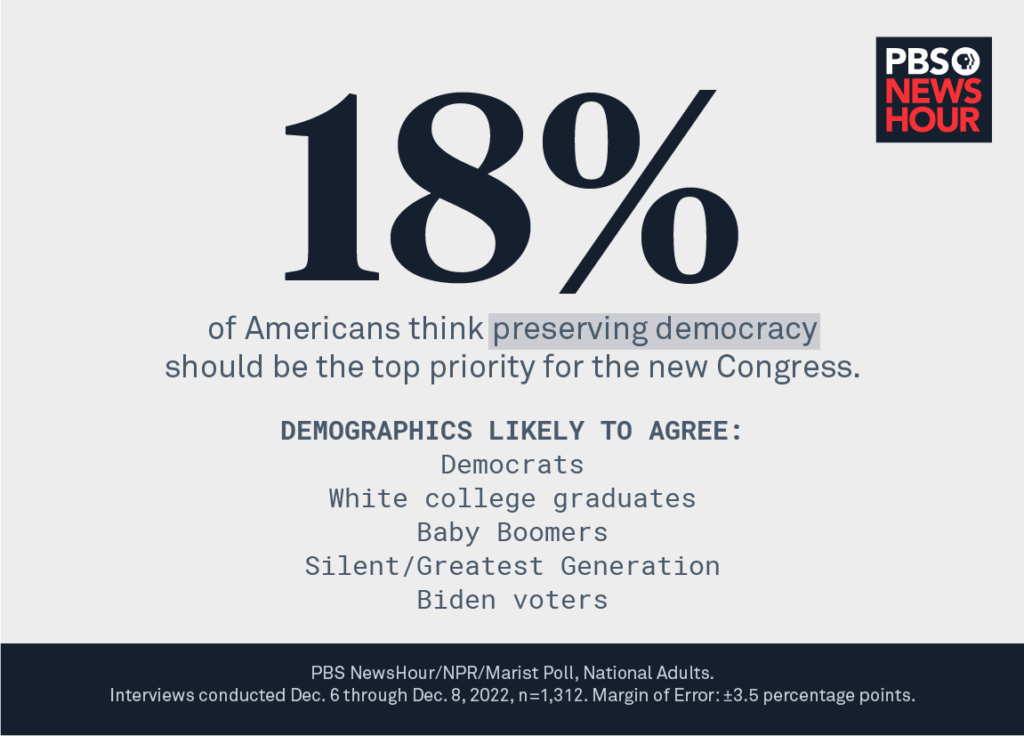 These latest numbers are “disheartening” and show “the fissures in our democracy that have existed for several decades,” Democratic strategist Joel Benenson said.

“There are sharp divisions based on education, region, on fundamental attitudes here where one would hope we are not just being partisan when you talk about either party being a threat to democracy,” he said.

Yet the poll found at least one other area where common ground has grown. An expanding majority of Americans indicated support for same-sex marriage. Roughly two-thirds of U.S. adults say that same-sex couples’ right to marriage should be legally protected, an increase of 18-percentage points since 2013. This comes despite many recent state and local government efforts to marginalize LGBTQ citizens and limit their rights.

“Nationwide support for same-sex marriage is the highest it has ever been,” said Shoshana Goldberg, who directs public education and outreach for the Human Rights Campaign, in a written statement to the PBS NewsHour.

Few issues in U.S. politics seem to draw such unified support these days, but the rapid shift in support for marriage rights over the last few decades reveals how dynamic American political perspectives can be, even when it feels like Washington is stuck in gridlock.